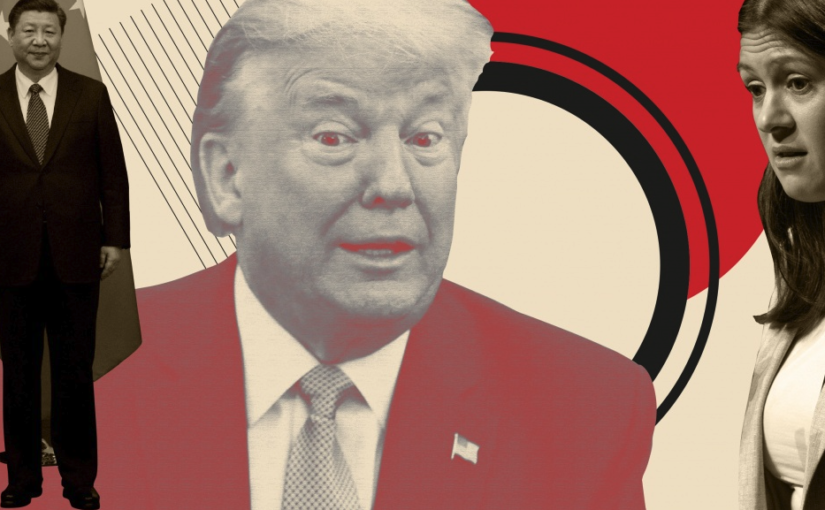 There’s been a worrying upsurge in anti-China propaganda on both sides of the Atlantic. While imperialist hostility towards China’s rise has become an intrinsic characteristic of the current era – particularly since the launch of the ‘Pivot to Asia’ by the Obama administration in 2011 – the rhetoric has become increasingly hysterical and absurd over the last few months.

There are currently four main lines of attack being pushed on a daily basis by the US and British ruling classes:

Unsurprisingly, it’s the US government leading the charge. Secretary of State Mike Pompeo accuses China of having “broken multiple international commitments including those to the WHO, the WTO, the United Nations and the people of Hong Kong”. He rails against China’s “predatory economic practices, such as trying to force nations to do business with Huawei, an arm of the Chinese Communist Party’s surveillance state.”

This is a bi-partisan position in the US, sadly. Democratic presidential contender Joe Biden is keen to prove he’s also every bit the China hawk, threatening sanctions and promoting a zany and totally unfounded smear about the forced sterilisation of Uyghur women. Even progressive congresswomen Alexandria Ocasio-Cortez, Ilhan Omar and Rashida Tlaib have joined in with this mindless China-bashing.

In both the US and Britain, relations with China are at their lowest point for decades. It’s no surprise that the Boris Johnson government, instinctively Atlanticist and desperately pursuing a post-Brexit trade agreement with the US at almost any cost, is largely parroting Trump’s line.

Having agreed in January to Huawei having a role in the development of Britain’s 5G infrastructure, the government is now considering dropping Huawei so as not to be “vulnerable to a high-risk state vendor”. Foreign Secretary Dominic Raab has stated there’ll be “no return to business as usual” in Britain’s relations with China. Meanwhile, leading government officials have been vocal in their criticism of Hong Kong’s new National Security Law, going so far as to offer some three million Hong Kong residents the opportunity to settle in Britain and apply for citizenship.

Those of us who stand for peace and for mutually beneficial cooperation between Britain and China might hope that the Labour Party would provide some meaningful opposition to the government’s reckless behaviour. Unfortunately the indications thus far are that Labour is enthusiastically climbing aboard the New Cold War bandwagon.

Shadow foreign secretary Lisa Nandy has been actively promoting anti-China propaganda and pushing the Tories to take a harder stance against China, for example urging that action be taken against British businesses that are “complicit in the repression” in Hong Kong (ie that don’t actively support the riots).

While Nandy’s words might bring disappointment to socialists, progressives and peace activists, they were at least welcome in certain quarters: notorious right-wing blogger Guido Fawkes celebrated the “welcome change in Labour Party policy – standing up to, rather than cosying up to despotic regimes.”

Nandy’s position is however positively nuanced in comparison to that of Stephen Kinnock, Shadow Minister for Asia and the Pacific, who accuses China of promoting its “model of responsive authoritarian government” worldwide. Kinnock describes the ‘golden era’ of Sino-British relations, inaugurated during the Cameron government, as being an “abject failure” in which Britain had “rolled out the red carpet for China and got very very little in return”.

It therefore seems that the Labour leadership in its current incarnation is moving towards unambiguous support for the US-led New Cold War on China. It’s particularly demoralising that, with a few honourable exceptions, most notably Diane Abbott, the Labour left isn’t currently putting up any serious resistance to this dangerous trajectory.

While very few Labour MPs have spoken of the dangers of a New Cold War, John McDonnell has recorded a histrionic (and hopelessly one-sided) denunciation of the Chinese state’s alleged mistreatment of the Uyghur Muslims. Apsana Begum has repeated these tropes in parliament, claiming that when the Chinese government celebrates its successful suppression of the East Turkestan Islamic Movement’s murderous bombing campaign, its “definition of terrorism is troublingly vague”. The usually-excellent Claudia Webbe has called on the government to “oppose state-sanctioned violence” in Hong Kong, choosing to ignore the United States-sanctioned violence of separatist protestors.

This is all frankly disastrous and worrying. The US administration is leading a very serious escalation of the New Cold War, trying to isolate China, trying to demonise it, trying to undermine it and to prevent its economic rise. The propaganda ‘soft war’ with regard to Hong Kong, Xinjiang and Covid-19 is combined with moves towards economic ‘decoupling’ along with ‘hard war’ encirclement measures, including ramped up and provocative patrols in the South China Sea.

A New Cold War will bring no benefit whatsoever to ordinary British people. It will mean fewer jobs, reduced investment, reduced export markets and increased prices on imports. All this will be accompanied by rising anti-Asian racism and a renewed momentum along the ideological dead-end of empire nostalgia. Even the relatively more sane representatives of the ruling class such as Jeffrey Sachs recognise the danger of this wave of sinophobia “spiralling into greater controversy and greater danger”, resulting in a US-China Cold War that’s “a bigger global threat than the coronavirus.”

What British people need to do, in the interests of peace and progress, is to push for respectful, friendly and mutually beneficial relations with China. Opposing the New Cold War must become a key priority for the labour and anti-war movements.

Activists in Britain and the US are organising an international online meeting against the New Cold War, to take place on Saturday 25 July at 2pm BST. Speakers include Medea Benjamin, Vijay Prashad, Qiao Collective, Wang Wen, Jenny Clegg and Kate Hudson. More info at www.nocoldwar.org