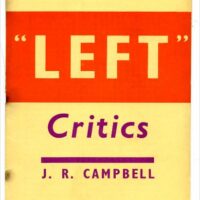 A version of this article first appeared in the Morning Star on 7 August 2019.

George Orwell’s ‘Homage to Catalonia’ is, for many, the defining account of the Spanish Civil War. Although it took up the ideological perspective of just one of the many different factions that participated in that war, and although Orwell’s personal experience of the action was limited to a short stint on a quiet front, ‘Homage to Catalonia’ has been reissued dozens of times and is on school and university curricula throughout the western world.

Orwell’s perspective made its way even further into the popular consciousness as a result of socialist film-maker Ken Loach’s 1995 film ‘Land and Freedom’, which unfortunately is based largely on Orwell’s narrative.

‘Homage to Catalonia’ essentially promotes the political positions of a relatively small Trotskyist group called the Workers’ Party of Marxist Unification (POUM). The POUM had argued that the Popular Front government established in 1936, against which General Franco’s fascist uprising was directed, couldn’t be trusted to pursue the fight against Franco, because it was too afraid of unleashing the forces of socialist revolution. In Orwell’s words, the Republican government was “manifestly more afraid of the revolution than of the fascists.” For Orwell, all the problems and failures of the Republican armies in the Civil War were due to the vacillating nature of the Popular Front and its major supporter on the global stage: the Soviet Union.

Given Orwell’s production of the two most prominent anti-communist novels of the twentieth century – ‘Animal Farm’ and ‘1984’ – and his later snitching on communists to the British state, it’s perhaps not surprising that he took positions on the Spanish Civil War that were fundamentally hostile to the Soviet Union and the Spanish Communist Party.

For this British aristocrat – Old Etonian and former colonial policeman in Burma – the Republican government just wasn’t radical enough, because it was attempting to hold together a fragile alliance of class forces against fascism. Given the number of people that denounced the progressive governments in Chile (1970-73) or Brazil (2003-16) from the left – in many cases contributing to their weakening – Orwell’s critique of the Republic is eerily familiar to modern ears.

The two pamphlets published in this small volume from Manifesto Heritage offer another side to the story.

JR Campbell’s ‘Spain’s Left Critics’ was originally published in 1937, just a year into the war, and deals with the POUM’s criticisms as they were being issued. Arguing against the accusation that the Popular Front was the Spanish equivalent of Kerensky’s provisional government in Russia, Campbell defends the Spanish government’s record: “It released the 30,000 working class political prisoners. It restored autonomy to the Catalan people. It restored the rights of the unions and enabled the workers to win improved conditions all round. It legalised the seizure of the land by 87,000 peasants. It broke up the fascist leagues. In the critical moment of the fascist insurrection it armed the workers.”

The Kerensky comparison betrays a fundamental misunderstanding of the class forces involved. Kerensky’s provisional government was, in Campbell’s words, “a bourgeois government carrying on an imperialist war”. The Spanish Popular Front, on the hand, was under attack from precisely the armed representatives of the capitalist and landowning classes. Equating the two was indeed “the purest nonsense”.

Bill Alexander’s pamphlet takes issue with Orwell’s characterisation of the Spanish people as being “good at many things but not at making war.” He points out that millions of ordinary Spaniards, with the help of the International Brigades, “despite most of the regular army going over to Franco, deprived of weapons, held back not only the Spanish fascists but large military units of German and Italian forces for 32 months. Far longer than the French and Belgian forces did in 1940!”

Alexander explains that, despite the claims of a few disparate ultra-left fantasists, the circumstances didn’t exist in 1930s Spain for a socialist revolution. As elsewhere, the clear priority was to build the broadest possible alliance against fascism, recognising that fascism represents the most violent, repressive, dangerous and reactionary form of capitalism. “Orwell’s views of the possibility of a revolution in Spain in 1936 and 1937 were naïve in the extreme.”

The reissuing of these two pamphlets provides a valuable contribution to the study of the Spanish Civil War. Paul Preston, a distinguished historian of the war, describes ‘Homage to Catalonia’ as a “moving but ultimately narrow vision … written with a pro-POUM stance which has been taken, erroneously, as an overview of the war, which it is not.” Preston’s book ‘A Concise History of the Spanish Civil War’ is a good starting point for those looking to explore this topic. Bill Alexander’s book ‘British Volunteers For Liberty: Spain, 1936-1939’ is also essential reading. 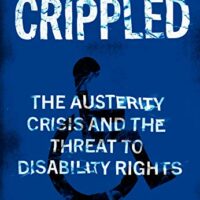 A version of this article first appeared in the Morning Star on 19 July 2019.

‘Crippled’ is a well-written, thoroughly-researched and harrowing account of how austerity – and the classist, ableist ideology that accompanies it – has impacted millions of disabled people. It is, in the words of Rob Delaney, “a ferocious, thoroughly substantiated indictment of this government’s maltreatment of its disabled children, women and men.”

Frances Ryan provides comprehensive statistical evidence demonstrating that disabled people have been disastrously and disproportionately affected by the last decade of public spending cuts. This evidence is very effectively combined with interviews and case studies showing just how badly our society is failing. The reader is introduced to people who have seen their benefits and support cut to such an extent that they are routinely having to choose between eating and heating; people forced to sleep in their wheelchairs because they no longer qualify for a carer to help them get to bed; people resorting to online crowdfunding to raise money for wheelchairs and nutritional supplements; people driven into outright destitution and stripped of the right to live in their own homes.

Austerity has brought about a historic step backwards for the disabled. Disability benefits started to be rolled out in the late 1940s, as part of the postwar Labour government’s commitment to a welfare state. This was accompanied by a cultural shift towards appreciating that disabled people were full human beings with rights and something to offer society, as opposed to defective nuisances to be hidden and ignored. Increasingly, disabled people had the right to support, education and work, and to live free from discrimination. There was a growing awareness of the need to make buildings, services and technology accessible to all.

Much of this progress has been reversed as a direct result of the austerity programme introduced in 2010. The British state is now manifestly failing in its duties towards the disabled in terms of housing, employment, education, healthcare and care provision. This is no small problem: there are an estimated 12 million people in Britain living with disabilities, visible and invisible. According to recent research by the Joseph Rowntree Foundation, at least 4 million of these are now living below the breadline. The UN has described this situation as a “human catastrophe”.

One of the most grievous measures has been the 2012 introduction of the Bedroom tax, whereby public housing tenants with rooms deemed to be ‘spare’ received reduced housing benefit. This overwhelmingly impacts the disabled: almost half of the people that have had their benefit reduced have a disability. But, in reality, “these are box rooms lined with adult nappies and oxygen cylinders. Many of the ‘spare rooms’ that disabled people had their benefits docked for were in fact being used to store vital medical equipment or for a carer to sleep in.”

Benefits sanctions are another key cost reduction mechanism that has disproportionally affected the disabled, who are routinely sanctioned for failing to attend meetings that they don’t have the means to attend. Ryan notes that, between 2013 and 2014, sanctions against disabled and chronically ill people rose by 580 percent, leading to immense privation. This situation is set to get much worse with the rollout of Universal Credit.

Ryan points out the appalling irony that there are five times more officials paid to investigate benefits fraud than there are to investigate tax evasion, even though the latter costs the state over 20 times as much as the former.

Alongside the direct economic effects of austerity, a shame-and-blame culture is emerging, with the government and media talking incessantly about “benefits cheats” and the “work-shy long-term sick”. “The image of a disabled person in the new age of austerity was not that of a human being who deserved support but of a liar and leach, living on the taxpayer’s expense,” writes Ryan. This narrative reinforces the message that rising poverty and inequality aren’t caused by capitalist crisis or free market fundamentalism, but by a bloated welfare bill. It’s no coincidence that the last few years have seen a marked increase in hate crimes against the disabled.

We must – urgently and immediately – move towards a system that affords disabled people their full human rights. With the appropriate support in place, disabled people can expect to lead dignified and fulfilling lives. Labour has promised to reverse the cuts to disability support, to end the punitive sanctions regime, and to “transform our social security system from one that demonises disabled people to one that is supportive and enabling.” We must fight to turn these promises into reality.

Frances Ryan’s book gives a voice to millions of disabled people suffering under austerity. It is essential reading.