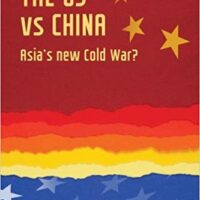 This article first appeared in the Morning Star on 23 October 2017.

China’s rise is the most significant development in modern history since the collapse of the Soviet Union. For most readers of this newspaper, it is a profoundly positive advance: hundreds of millions have been lifted out of poverty, and China has been transformed from a technologically backward and underdeveloped country into a global powerhouse. Increasingly it is a world leader in environmental preservation and in the pursuit of a new type of globalisation based on cooperation and shared prosperity.

Not everyone is pleased with this rebalancing of the global balance of forces, however. For the political leadership of the western imperialist countries, China’s rise is a source of intense concern, threatening as it does the US-led status quo in international relations. Jude Woodward, author of the recently-released The US vs China: Asia’s new Cold War? points out that the US in particular “remains unreconciled to China’s rise” and has therefore made ‘China containment’ – slowing down or reversing China’s growing influence and economic strength – the cornerstone of its foreign policy.

Limiting China’s rise will not be easy; likely it will prove to not be possible. China will very soon replace US as the world’s largest economy. Furthermore, its growth is not only benefitting the rich but is contributing to a rapid increase in wages, social welfare and quality of life for the working class and peasantry. This means that the Chinese government and ruling Chinese Communist Party enjoy broad popular legitimacy; consequently it’s difficult to destabilise China from within – unlike in the USSR, where a sluggish economy contributed to a certain ambivalence in relation to defending socialism.

Meanwhile, China has also become a hugely important investment and trading partner to dozens of countries around the world. As well as providing an alternative source of investment for poorer countries, Chinese investment and markets have served to make China’s growth a pivotal factor in the global economy. Therefore even among the US’ traditional allies there is some reluctance to join in with a strategy of China containment.

In steps Donald J Trump. If there is anything consistent in Trump’s foreign policy, it is hostility to China and an urge to preserve US supremacy at all costs. During his election campaign, he talked constantly about China stealing American jobs, engaging in state-sponsored hacking, and generally “using our country as a piggy bank to rebuild China.” Steve Bannon, up until August this year the most influential member of Trump’s inner circle, confidently predicted in March 2016 that “we’re going to war in the South China Sea in 5 to 10 years – there’s no doubt about that.” Only a few weeks ago, Bannon told the New York Times: “A hundred years from now, this is what they’ll remember — what we did to confront China on its rise to world domination”.

With limited room for manoeuvre in economic terms, the US is majorly ramping up its physical presence in the Pacific in order to pressure China and ensure US domination of international waters. Meanwhile, it’s turning up its rhetoric against North Korea in the most dangerously irresponsible way, in order to justify its increased naval presence and to strengthen hawkish elements in Japan, South Korea and Taiwan – and to undermine popular opposition to its THAAD anti-ballistic missile defence system, which in reality targets China. As Woodward points out, this aggressive policy is “analogous to the tactics the US pursued against the USSR over the course of the twentieth-century Cold War… The endgame is a pro-US military, economic and diplomatic noose around China that can be tightened to veto, punish, pressure or threaten China and narrow its options on a range of issues.”

The US vs China: Asia’s new Cold War? provides a timely, thorough and accessible path to understanding the US-China confrontation, which is surely the most significant dynamic in global politics today. In just 260 pages, the author is able to give a surprisingly detailed account of China’s rise, the different threads of US opposition to that rise, and the multitude of devices being employed by the US in its bid to see off the Asian challenge and secure a ‘new American century’. Woodward counsels that it would be far better for the US to change its anti-China stance, promote peace and accept a role in a new, multipolar world order. Excellent advice. But “whom the gods would destroy they first make mad”.