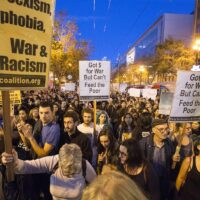 This article was originally published on Telesur English

Militarism is the default imperialist response to crisis

Imperialism is going through a most profound crisis; a crisis which could well mark the beginning of a terminal decline. For reasons of simple self-preservation, the main imperialist blocs (North America, the EU, Japan) are working desperately to prevent that decline. That is their major political project right now, around which they are more-or-less united (in spite of any number of divisions and contradictions among themselves).

The key geostrategic components of that project are:

There is room for variation in terms of tactics and relative priorities, but these aims are, in the long term, non-negotiable.

A long-overdue emergence of the left

Also related to the crisis is the fairly sudden surge in popularity for political movements to the left of traditional social democracy, most prominently in Greece, Spain, Portugal, Britain, Ireland and the US. Although these movements don’t promote a revolutionary socialist agenda – their programmes are by-and-large based on pro-worker reforms within a capitalist economic context – the ruling classes have reacted to their rise with intense hostility, manifested in a variety of ways (for example the Troika’s flagrantly antidemocratic treatment of the Syriza government; the media disinformation campaign against Jeremy Corbyn; or the DNC’s machinations against Bernie Sanders).

There are two major reasons for this hostility. First, the imperialist ruling classes are unanimous in their view that the working class must be made to shoulder the economic burden of the crisis – the neoliberal vision leaves precious little space for pro-worker reforms. Second, these various socialist-oriented movements and their trade union supporters have little-to-no enthusiasm for the geostrategic aims outline above. They simply don’t have the will or the ability to unite their populations around an aggressive, militaristic project which – morality and ideology aside – is hugely expensive and doesn’t leave sufficient resources to prioritise welfare state spending and public investment.

Meanwhile, another key development in recent years has been the rise of far-right movements in various guises. They don’t call themselves fascist (at least not in public), but they represent the familiar tenets of fascism: capitalist conservatism, authoritarianism, shameless racism, crass demagogy, militarism, showy patriotism and violent repression. These movements seek to influence the working class (in particular the ‘white’ working class), but in reality they are faithful and reliable agents of capitalist class interests – hence they receive significant financial backing from that class.

While the emerging leftist movements work to unite all sections of the working class and oppressed people in pursuit of their common interests, the far-right movements promote maximum division and distrust, spreading racism, sexism, xenophobia and homophobia. The ‘unity’ they seek to deliver means universal submission to the ruling class’s political and economic project (certainly in a Trump-era USA, it’s not hard to imagine this submission being enforced by ‘alt-right’ paramilitaries). No more anti-war movements, no more diversity of opinion, no more second-guessing within the ruling class’s own ranks; in short, a very dangerous situation for anyone who doesn’t go along with the capitalist status quo. This is precisely the promise of the far-right for today’s ruling classes: turning whole nations into monolithic forces for the pursuance of imperialist aims.

Of course, many of these far-right elements – Donald Trump included – talk in populist terms about taking on the financial elite, about creating a fairer deal for ordinary people, or indeed of wanting to focus their attention on domestic matters and stop interfering in the rest of the world. But talk is cheap. Hitler, Mussolini, Franco, Salazar made similar noises; in power, they were the most consistent, ruthless and violent defenders of the interests of their respective elites. Given the known political positions of Donald Trump, Marine Le Pen et al; given their support base, the people around them, and their reliance on monopoly capital, it would be naive in the extreme to expect any government they head to go against the interests of imperialism. “Make America Great Again” is nothing but a concise restating of the Project for a New American Century – the goal to re-establish uncontested US dominance.

Breathing space for Russia and Syria?

Russia has established itself as a clear enemy of imperialism, simply by refusing to accept the role of a peripheral pawn in a global hierarchy with the US at its head; by asserting its political and economic independence; by opposing NATO encirclement. So it’s interesting that Trump, Le Pen and Nigel Farage have all spoken in terms of improved relations with Russia; Trump has spoken about coordinating with the Syrian government to defeat Isis. This has given some people within the anti-imperialist movement hope that a Trump presidency would be a boon for peace, a step away from the proven militarism of Hillary Clinton.

Such an idea is ahistorical. Imperialism, to paraphrase one of its most cynical defenders, has no permanent friends or enemies, only interests. Far-right elements have always represented the interests of capital, and the interests of western capital at this point in time demand hostility to Russia. Donald Trump might have some quirky personal admiration for Vladimir Putin, but does anybody seriously think that the US deep state will allow presidential idiosyncrasies to stand in the way of its global strategy? This is wishful thinking, and reflects a misunderstanding of the very nature of the state under capitalism.

Indeed, Syrian president Bashar al-Assad gave a much more realistic assessment of the possibility for improvement under Trump: “We don’t have a lot of expectations because the American administration is not only about the President; it’s about different powers within this administration, the different lobbies that they are going to influence any President.”

What’s true is that there’s a particularly optimistic section of the US ruling class that feels it might be able to tempt Russia into a tactical alliance against China. And Trump himself understands the tension in existing US policy between pushing intense islamophobia at home whilst providing extensive support to Wahhabi terrorists abroad. These factors combined could possibly result in a temporary improvement of tensions with Russia and of reduced support for regime change in Syria. On that basis it would be sensible for the Syrian government to try and open lines of communication with the incoming US administration. What would not be sensible is for anti-imperialists to paint the Trump presidency as some kind of step-back from US neocolonialism.

The chances of a Trump government actually following through with a better line on Syria and Russia are slight. Meanwhile, Trump and his team have already indicated that they will deepen US hostility towards China, reverse the bilateral normalisation with Cuba, increase support for Israel, and continue to support reactionary neoliberal elements in Latin America. Several notorious ‘hawks’ have been appointed to the incoming cabinet.

In short, there is no anti-imperialist basis for being soft on the far-right, anywhere in the world. It is a myth that these reactionary elements would be ‘isolationist’, because the class interests they represent have no use for such a policy. The crisis is driving imperialism to interventionism, not isolationism. History shows all too clearly that far-right governments pursue their class interests in a more hawkish, more aggressive, more expansionist way, combined with more internal repression, more racism, more xenophobia.

Pushing a socialist and anti-imperialist agenda

The immediate, urgent task facing us is to build up a broad, powerful alliance against imperialism, against neoliberalism and against fascism. We certainly don’t further that aim by allowing ourselves to be hoodwinked by quasi-fascist (or “alt-right”) lies.

The left in Europe and North America has a unique opportunity to re-establish itself; to mobilise and engage the working classes and oppressed; and, furthermore, to do so on an internationalist basis. That’s the project to pursue. It’s anti-neoliberal, anti-austerity, anti-war, anti-racist, anti-sexist, anti-xenophobic. It promotes public investment, job creation, environmental protection, trade union rights, welfare spending, appreciation of diversity, and a commitment to high-quality public education, healthcare and housing.

This new wave of socialist-oriented mass movements is hugely significant, and the opportunity it represents mustn’t be sacrificed at the alter of purism and dogmatism. We don’t get to choose the reality that history hands down to us. These movements have different origins, traditions and trajectories; many of them are vulnerable to mainstream social-democratic ideas and capitulatory tendencies; many of them have a “labour aristocratic” element and are inconsistent in their anti-imperialism. This doesn’t mean they should be dismissed; it simply indicates the clear and urgent need for experienced socialists and anti-imperialists to support, shape and engage with them.

Oppressed people are increasingly fed up with the neoliberal status quo; more than ever, they are open to alternatives. If the left can’t develop sufficient unity, imagination, courage and strategy to win over the masses, then the field is wide open for every nasty strand of fascism, racism and xenophobia. There’s a lot at stake.