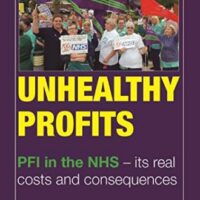 This article first appeared in the Morning Star on 25 March 2019.

John Lister’s well-written and scrupulously researched book is a crucial weapon in the defence of the NHS.

It advances a rigorous explanation of the economic theory behind the private finance initiative (PFI), its putative benefits and the reality of its implementation in the NHS over the last quarter-century, drawing on the specific experience of the Pinderfields and Pontefract hospitals in Yorkshire built as part of a £311 million deal with the Royal Bank of Scotland.

Championed by Tory chancellor Norman Lamont, the concept of PFI originally surfaced in the early 1990s but it wasn’t until the New Labour victory of 1997 that PFI went from being one of many funding models to being the only game in town.

“PFI had an irresistible attraction for New Labour ministers keen to boast of the new hospitals that were being built [and for] NHS trust bosses snatching at the lure of private funding at a time when public provision of capital investment in the NHS had been deliberately reduced,” Lister writes.

Superficially, PFI seemed like a great idea. It meant that new hospitals could be built without the Treasury having to pay for them up front, with private consortiums doing the borrowing, building the hospitals and then making their money back over a 25 to 40-year period through monthly fees paid by the relevant NHS trust.

Thus vast infrastructure spending was kept off the Treasury’s books and private-sector partners could absorb all the risk. It was an idea that fitted perfectly with the prevailing neoliberal economic orthodoxy.

Of course, massive inefficiencies are built into the very fabric of PFI. Private-sector borrowing is much more expensive than its public-sector counterpart and, where new hospitals were needed, the money could’ve been borrowed by the government at a far lower rate of interest than that paid to PFI financiers.

More significantly, PFI consortiums are private companies with a primary responsibility to their shareholders, whose handsome dividends can only be funded by overcharging their customers —the NHS.

Lister shows all too clearly that in practice PFI has been comprehensively disastrous for the NHS. Once hospitals have been built and are being leased back to NHS trusts, the overall cost over the lifetime of a PFI is typically three to four times the capital value — not a good mortgage deal by any standard.

Beyond the cost of the buildings themselves, NHS trusts are also tied into inflated maintenance costs, whereby PFI consortiums enjoy an exclusive contract to provide — invariably bad — food, change lightbulbs and impose penalty charges on people parking in A&E.

The bloated monthly payments have left many NHS trusts on the verge of bankruptcy. Ironically, a number of trusts have had to be bailed out by the Treasury, thereby voiding the one supposed benefit of using a PFI in the first place.

Other trusts have been forced to make shameful decisions on staff and service provision. Bed numbers have gone down in nearly every PFI hospital and there is constant pressure to cut back on staff numbers and conditions. Increasingly, agency staff are preferred so as to avoid paying negotiated rates.

Lister notes that British Medical Association research shows that not only did the PFI process result in an average 32 per cent loss of beds but during the planning process the costs of the PFI schemes escalate by a “staggering average”of 72 per cent.

After cutting staff and beds, the only remaining means to raise the money to pay PFI costs is often to sell NHS land and buildings to the PFI consortiums, thereby continuing the transfer of public assets into public hands. And these are not just any private hands but usually off-shore finance capitalists that go to great lengths to avoid paying tax.

HSBC Infrastructure Company Limited, incorporated in the tax haven of Guernsey, has over 100 investments in health, education and transport valued at more than £1.8 billion.

Lister also offers a neat solution to the PFI rip-off — nationalising the special purpose vehicles that run them. Any compensation and changes to the monthly payments would be determined by an Act of Parliament and not subject to complex and expensive legal wrangling.

“After more than 25 years of PFI schemes in Britain, it’s high time this relatively straightforward, neat, legal and affordable policy was explicitly adopted by the Labour Party as the government in waiting and endorsed by the unions whose members have been exploited by PFI contractors and consortia,” Lister concludes.