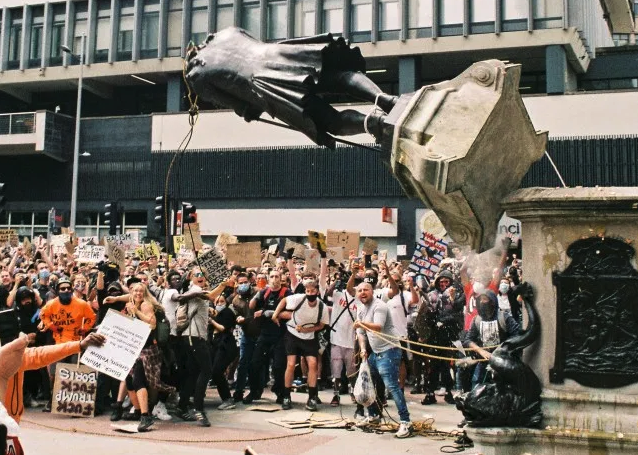 On 7 June, during an anti-racist rally in Bristol (part of the global wave of protests in the aftermath of the police murder of George Floyd), a group of protestors ripped a statue of notorious slave trader Edward Colston from its plinth and rolled it into Bristol Harbour. This act, although widely condemned by establishment politicians (Home Secretary Priti Patel for example describing it as “sheer vandalism”), was justly celebrated by anti-racists and anti-colonialists worldwide. A prominent member of the Royal African Company, Colston is estimated to have been involved in the enslavement of at least 84,000 Africans, nearly a quarter of whom died on the journey between West Africa and the Americas. People in Bristol – particularly its black community – have long campaigned for the statue to be removed, and have endured nothing but endless prevarication from the local authorities.

Colston’s upending was quickly followed by similar actions around the world. In Boston, Christopher Columbus was decapitated. In Richmond, Virginia, Jefferson Davis was toppled. (Davis was president of the Confederate States from 1861 to 1865 and a pro-slavery activist). The long-running campaign to remove Oxford University’s statue of the white supremacist and imperialist Cecil Rhodes has gathered fresh momentum. In Antwerp, Belgium, the statue of King Leopold II has had to be pre-emptively removed, while in Brussels, protestors climbed on a statue of Leopold and defiantly flew a giant flag of the Democratic Republic of Congo, which country suffered so terribly under Leopold’s brutal colonial rule.

Slavery and colonialism created the foundations of modern capitalism

This struggle around statues is immensely important. In Britain, statues of people like Edward Colston and Cecil Rhodes provide an uncomfortable reminder of just how much of Britain’s ‘greatness’ is built on a foundation of slavery, colonialism, plunder and genocide. The industrial revolution, which propelled Britain to domination in the early 19th century, started with the development of the steam engine. This scientific development was funded to no small degree with profits from the slave trade. Many of Britain’s cities blossomed as a result of “the turning of Africa into a warren for the commercial hunting of black-skins”, as Karl Marx so memorably put it.

For those of us that live in countries that have benefitted from colonialism, it’s crucial that we assess and understand this history. The primary beneficiary of colonialism and the slave trade was of course the capitalist class. However, ordinary people also benefitted to some extent. Indeed the ruling classes sought to justify colonialism on the basis that the profits resulting from it could be used to improve conditions for the working class and thereby maintain social stability. It was none other than Cecil Rhodes who said: “The Empire is a bread and butter question. If you want to avoid a civil war you must become imperialists.” Only by facing up to these uncomfortable facts can we hope to forge a path towards a united, non-racist and non-imperialist future.

The link between racism and imperialism

The tearing down of statues in the context of a global protest against white supremacy also reminds us just how closely linked racism and imperialism are. Columbus, Leopold, Rhodes, Colston and their ilk were racists and imperialists, and as representatives of a relentlessly expanding European capitalism couldn’t realistically be otherwise. Racism served as a justification for slavery and empire: “all men are created equal”, but that doesn’t apply to subhuman species. As capital spread into Africa, Asia and the Americas, so did a globalised racial hierarchy that continues to assert itself today on the streets of Minneapolis and elsewhere.

Just as racism in the colonial era served to prevent the working class in the imperialist countries from taking up the interests of the masses in the oppressed countries, racism in the modern era serves to divide the white working class in the imperialist countries from the masses of the developing world, and furthermore from minority communities originating in the developing world. The constant theme of racism is therefore its role in undermining solidarity between oppressed peoples.

So there is an inextricable link between racism and imperialism. Both are manifestations of national oppression, carried out by the ruling classes of the major colonialist countries (initially Britain, Spain, Italy, Portugal, Holland, Belgium and Germany, and later the US and Japan) as a means of perpetuating capitalism. This link between racism and imperialism is paralleled by the equally inextricable link between anti-racism and anti-imperialism. One cannot meaningfully oppose one manifestation of national oppression without opposing all manifestations of national oppression. To oppose racist policing is also to oppose the legacy of slavery represented by the likes of Edward Colston and Cecil Rhodes. It also means opposing imperialist wars, such as have been carried out against Syria, Libya, Iraq, Afghanistan and Yugoslavia. It also means opposing imperialist destabilisation and coercion, such as is currently being carried out against Venezuela, Zimbabwe, Iran, Cuba, Syria, DPR Korea, Nicaragua and other countries. It also means opposing attempts to reassert US global hegemony, currently gathering steam in the form of a New Cold War against China.

What statues should fall in Hong Kong?

Which brings us to the contentious issue of the protests in Hong Kong, a source of much confusion in the West. As Ajit Singh and Danny Haiphong have recently noted, some of the protest leaders in Hong Kong have attempted to associate themselves with Black Lives Matter, claiming a common cause against oppression and police brutality in spite of their close ties to some of the most reactionary and racist elements in US politics. Student activist Joshua Wong has gone so far as to accuse basketball star LeBron James of hypocrisy over his active support for anti-racist protests in the US and his lack of support for anti-government protests in Hong Kong.

The anti-racist protests taking place around the world in response to the gruesome murder of George Floyd are protests against national oppression, as discussed above. The attacks on the statues of racists, slave-traders, colonisers and imperialists are deeply connected to this movement. If black lives matter, the adulation of colonial oppressors must end.

So are the anti-government protests in Hong Kong also directed at racism and imperialism? If they are, wouldn’t we expect the protestors to be toppling the statues of Queen Victoria, King George VI and Thomas Jackson? After all Hong Kong is practically the quintessential example of colonialism. Incorporated into China since 214 BCE, it was seized by Britain in 1842 following the First Opium War, converted into a colony, and used as a base from which to direct British commercial operations, the most important of which was pushing opium onto the Chinese people. In 155 years of colonial rule, there were 28 British governors, with not a single one elected by Chinese people; Hong Kong was run essentially as an apartheid colony in which white people led a highly privileged existence.

Hong Kong was only returned to Chinese control in 1997, and thus a great deal of its colonial legacy remains. And yet the Hong Kong protestors don’t attack this legacy; in fact they are nostalgic for the days of British rule – waving union jacks and singing God Save the Queen – and they work closely with imperialist anti-China hawks like Tom Cotton, Marco Rubio and Mike Pompeo (all of whom, incidentally, are violently opposed to Black Lives Matter).

The only action Joshua Wong and his group have taken in relation to statues was to cover the Golden Bauhinia statue in black cloth ahead of President Xi Jinping’s visit to the city in 2017. The Golden Bauhinia statue was built in 1997 to celebrate the handover of Hong Kong and the establishment of the Hong Kong Special Administrative Region. So it turns out the Hong Kong protestors attack anti-colonial symbols, not colonial symbols. This amply demonstrates the fundamental difference between the global anti-racist protests and the Hong Kong ‘pro-democracy’ protests.