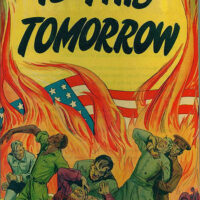 Let’s talk about the C-word: Comm**ism. So much more shocking than the other C-word. What is it, and why is everybody so afraid of it?

You’d think it’d actually be pretty popular. I mean… it makes quite a lot of sense. What does it mean? It means a classless society, built on common ownership of the means of production, that by definition works to overcome the worst inheritance of human history: poverty, starvation, war, racism, sexism, national oppression, social alienation, inequality, exploitation. A collaborative, participatory society that seeks to elevate the oppressed to the highest levels of happiness, education and culture; that builds upon all advances in human understanding in order to create a qualitatively new way of being. This isn’t the place to dive into the theory, but let’s face it, it sounds great.

And yet, in the collective mind, ‘communism’ is a dirty word. When we think of communism, we don’t think of progress, literacy, economic uplift, culture, national reconciliation, peace, creativity, diversity. Rather we think of secret services, prisons, indoctrination, brainwashing, stale uniformity, dictatorship, militarism, bread queues, ration books. We think of the world described by George Orwell and Aldous Huxley. We think pretty much exactly what senator Joseph McCarthy wanted us to think about communism: that it is the enemy of freedom.

This image is of course unfair, and represents a massive propaganda victory for the real enemy of peace and freedom: the imperialists. Ever since the Bolsheviks took power in 1917 – almost a century ago – the media and education systems in the ‘free world’ have made anti-communist propaganda one of their most central tasks. The wretched of the earth rising up and expropriating the oppressors? That’s the sort of contagious idea that has to be nipped in the bud. Hence the endless and intense slander campaign against any socialist country that ever existed, from the Soviet Union to Cuba, from Vietnam to Venezuela, from China to Albania, from People’s Korea to Yugoslavia. Any progress made by these countries is totally ignored; any problems and failures are magnified out of all proportion; issues are distorted and lies are spread.

Am I saying that these socialist countries, led by communist parties, were/are perfect models of this new type of society? Clearly not. There were, and are, massive problems in the building of socialism and laying the foundation for a future communism. However:

1) All of these problems are exaggerated by a well-funded western media and academia, and all too often the ‘statistics’ about socialist history are based on the claims of highly dubious McCarthyite ‘scholars’.

2) Issues regarding repression must be seen in the context of socialist states having to protect themselves within a hostile international atmosphere where the enemy spares no effort to destabilise and attack them (just look at the 600+ attempts by the CIA to kill Fidel Castro).

3) Building a new society and getting over the inheritance of feudalism and capitalism is never going to be easy.

It’s quite obvious to any thinking person that, even if we accept the extremely dodgy and dubious claims of CIA-payroll historians like Robert Conquest, the “crimes of capitalism” far outweigh any “crimes of communism”.

6) Meanwhile, in the face of great difficulties, socialist countries have achieved some pretty extraordinary things.

Let’s take China for example. Pre-revolution life expectancy was around 35; now it’s around 74. Literacy was under 20%; now it’s 93%. It has witnessed the most rapid poverty alleviation in history. Its people were looked down upon as the scum of the earth. As WEB DuBois said in a broadcast on Radio Peking:

“What people have been despised as you have? Who more than you have been rejected of men? Recall when lordly Britishers threw the rickshaw money on the ground to avoid touching a filthy hand. Forget not the time when in Shanghai no Chinese man dare set foot in a park which he paid for.”

And who doesn’t know that Cuba provides by far the highest standard of living for ordinary people anywhere in South America and the Caribbean; that it has a life expectancy of 79 and literacy rate of 99.8%, in spite of a cruel economic blockade; that it has done more to eradicate the scourge of racism than any other country in the western hemisphere?

And who doesn’t know that the Soviet Union brought about a profound improvement in the living standards of the vast majority of its people; that it defeated Nazi Germany and saved Europe; that it provided crucial support to the liberation movements in Africa, to Cuba, to Nicaragua, to Vietnam, to Korea; that it brought about a transformation of the republics of Central Asia, ground down for centuries by competing colonial interests? When we think of communism, why isn’t it all this that we think of?

Certainly, many individuals have suffered unfairly in socialist countries. But why is the blame always assigned to ‘communism’? If I want to see oppression and repression, I can take the briefest of walks down Tottenham High Street. If I want to see corruption, bureaucracy and the centralisation of power, I can observe the proceedings at Westminster. But these things don’t get attributed to ‘capitalism’. Most people who walk past dozens of homeless people each day don’t turn into zealous anti-capitalists (more’s the pity). Anti-communism is the dominant narrative, and so it’s easy to adapt to. Anti-capitalism is not at all the dominant narrative, and to adapt to it is to face isolation and abuse.

The question is: can the C-word be re-claimed, or has the propaganda war already been lost? Are sensible, progressive people so put off by any mention of communism that they immediately disregard anything associated with it? Do we need new terminology for the basic principles of equality, people’s power and social justice? I have come across quite a few very decent and principled people putting forward such an argument – that the C-word is beyond the pale. I’m not convinced. Imperialist cultural hegemony isn’t going to broken unless people who oppose it stand up confidently and loudly for what they believe in. Are we simply going to allow free reign to slander and disinformation? Should we leave prejudices intact? To use a parallel from the world of religion: could Muslims get rid of islamophobia by changing the name of their religion to, say, Democratic Mohammedanism?

Prejudices need to be attacked. Disinformation needs to be exposed. People’s psychological/ideological/cultural reliance on imperialism needs to be broken. That won’t happen if we keep playing by the enemy’s rules.