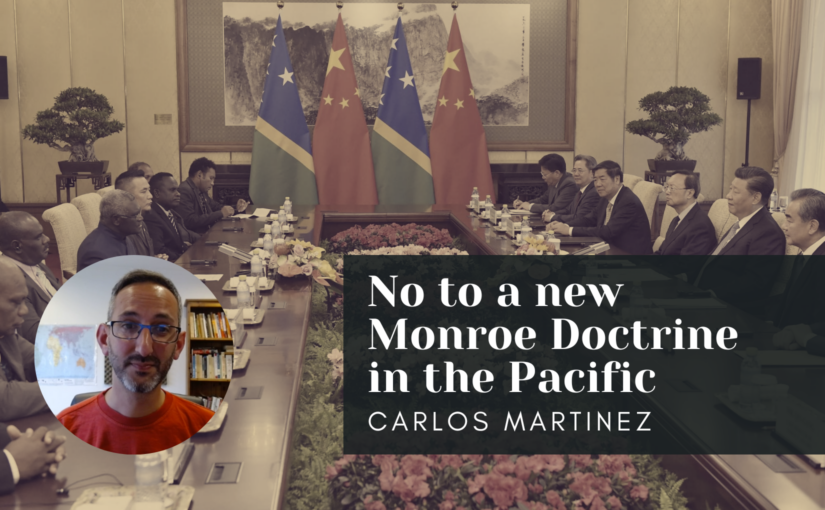 This article by Carlos Martinez first appeared on Friends of Socialist China.

The Anglo ruling classes have gone into a state of frenzy over a recently-signed security agreement between the People’s Republic of China and the Solomon Islands. Various people who had barely heard of the Solomon Islands just a few weeks ago are now expressing grave concern that this small sovereign nation could be used as a pawn by an aggressive and expansionist China in its bid for world domination.

The deal itself appears to be entirely ordinary, allowing for China to “make ship visits to, carry out logistical replenishment in, and have stopover and transition in the Solomon Islands,” in addition to providing the Solomon Islands police with training and – on invitation – support. Indeed, the Solomon Islands already has similar security cooperation arrangements with Australia, Papua New Guinea, New Zealand and Fiji; as such, the deal with China simply represents a desire to “seek greater security partnership with other partners and neighbours.”

Responding to criticism of the deal by Australian and US politicians, Solomon Islands Prime Minister Manasseh Sogavare assured that it was signed “with our eyes wide open, guided by our national interests”, and that it has been developed not as a means of power projection but of addressing the island nation’s security needs.

Nonetheless, Western politicians and media have reacted with an anxiety bordering on the hysterical. Indeed the Australian government made repeated attempts to prevent the deal being signed in the first place, and its failure has prompted bitter recrimination. Allan Gyngell from the Australian Institute of International Affairs commented to BBC News that “the objective had to be to stop something like this happening. You can’t read it any other way – this is a failure of Australian diplomacy.” Meanwhile, opposition leader Anthony Albanese described Australia’s failure to prevent the agreement going through as “a massive foreign policy failure” and “a Pacific stuff-up”. The Australian Labor Party is now promising that it will “restore Australia’s place as the partner of choice in the Pacific” if it is successful in the coming federal elections.