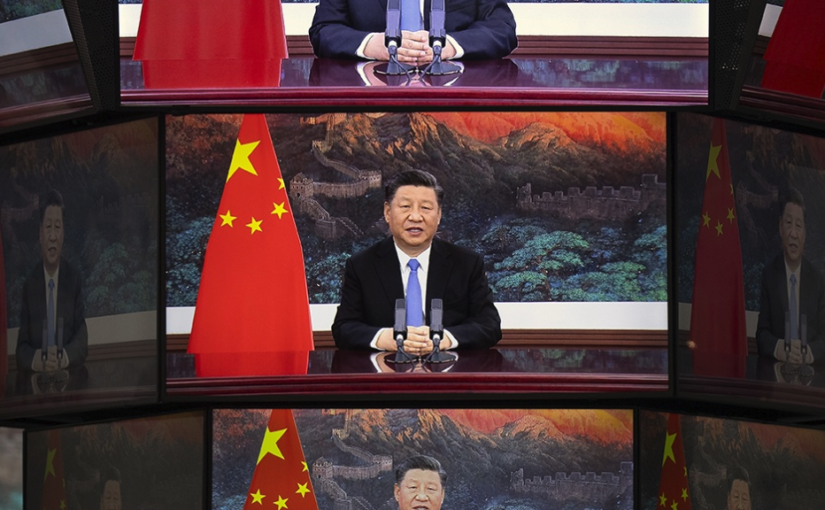 Capitalism is in turmoil. Ongoing economic stagnation, alongside the startling failure of the major Western countries to contain the coronavirus pandemic, is producing a crisis of legitimacy and a corresponding sense of panic among the ruling class.

The leading capitalist power, the United States, is the worst affected. Although it remains for the time being the world’s largest economy in GDP terms, its quality of life indicators are deteriorating. The poverty rate has reached 15 percent, the highest it’s been for 50 years. Infrastructure is crumbling. Large parts of the country are suffering chronic unemployment, a situation that Trump’s trade wars have singularly failed to fix. Covid-19 has taken the lives of a quarter of a million people, with the number increasing by a thousand every day.

Hitting out in all directions

Economic crisis goes hand in hand with social crisis, as a decline in people’s living standards leads them to question their political rulers. In response, capitalist governments look for ways to restore profitability whilst maintaining social stability. The most extreme example to date is the rise of European fascism in the 1930s, which employed barbaric violence and vicious racism in order to keep the working class in its place, whilst generating economic growth through investment in the war machine.

In Britain and the US, the ruling classes responded to the 2008 financial crash and ensuing economic crisis with bailouts for the rich and brutal austerity for the poor. In both cases, they have attempted to divert and debilitate working class resistance through the promotion of racism, xenophobia and islamophobia.

In geostrategic terms, the core component of the West’s response to the current crisis is the New Cold War on China.

China’s rise poses a particularly difficult problem for the US and for the imperialist world system it leads. For decades, the US grudgingly accepted China’s economic emergence, on the basis that its insertion into global value chains allowed Western multinationals to make fabulous profits. But Western politicians didn’t understand, or didn’t want to understand, China’s long-term strategy. It was never the Chinese leadership’s plan to turn their country into a permanent cheap labour pool for foreign multinationals. Rather, the quantitative increase in wealth and technological capacity would lead to a qualitative shift to becoming an economic powerhouse, an innovator, and a powerful voice in regional and global politics.

This is precisely what is now happening, and the US doesn’t know how to deal with the situation. China will certainly overtake the US as the world’s largest economy within the next few years. It’s already ahead in several important areas of technology, and is catching up fast in others.

What’s more, China is a politically independent country and a Third World power. Unlike Europe, Japan and the Anglosphere, China can’t be told what to do; it won’t sacrifice the interests of its people for the sake of helping the US maintain the ‘post-war liberal order’, ie a system of international relations that primarily serves the US.

As a developing country, China is pushing for an end to hegemony and for a multipolar world in which the sovereignty of all countries is respected. As a non-white power that has constructed its own path to progress and prosperity, China is helping to destroy the ideology of white supremacy so intimately bound up with the imperialist world system.

As a socialist country with a Communist Party government and an essentially planned economy, China is dismantling the established wisdom that Western free market liberalism is the perfect way to organise society.

In summary, the much-discussed ‘China threat’ is real, albeit not in the sense that Cold Warrior politicians mean. China’s rise poses no threat whatsoever to ordinary people in the West, but it certainly poses a threat to the prevailing global system of imperialism.

This is the context to the New Cold War. It is the reason for the ‘Pivot to Asia’, the trade war, the propaganda war, the attempts to ‘decouple’, the attacks on Chinese technology companies, the attempts to diplomatically isolate China, the fomenting of anti-Chinese racism, and the strategy of military encirclement.

Even with a change of presidency in the US, the broad outlines of this New Cold War are unlikely to change much, given the paucity of intelligent and far-sighted politicians in the US able to come to terms with the idea of a multipolar world order in which China and other countries have as much say as the US. As William Worthy, the African-American journalist and activist, wrote back in 1957: “Is it possible that our China policy stems in part from a sense of outrage that a hitherto passive nation of ‘little yellow men’ should stand up to the West and insist on full respect?”

Uniting against racism and Cold War

That the New Cold War is happening at the same time as a worrying rise in racism is no coincidence. Both are manifestations of neoliberal capitalism in crisis; both are being deployed in an attempt to preserve a system based on the needs of a wealthy elite at the expense of the vast majority of humanity. Both should be resolutely opposed by all those that want to see a world characterised by peace and cooperation, free from all forms of racial or national oppression.

We have the collective power to make a stand for peace and equality. The vibrant Black Lives Matter protests this summer are an indication that racist scapegoating hasn’t been universally successful and that young people are increasingly unwilling to be manipulated by divisive propaganda; that popular consciousness can be quickly raised and that concessions can be won.

Taking inspiration from this, we must forge maximum unity between the anti-war and anti-racist movements. In so doing, we’ll be picking up the baton from the last big wave of global anti-imperialist solidarity in the 1970s, when the black liberation movement in the West stood as one with the socialist and non-aligned countries and the anti-colonial liberation struggles.

The African-American freedom fighter Robert F Williams, who spent several years in exile in Cuba and China in the 1960s, wrote: “There is a great trend developing wherein more and more Afro-Americans are beginning to identify with the liberation forces of the world. The militant black people of racist America are becoming more and more anti-imperialist as well as being anti-racist. They are beginning to understand that the struggles of the world’s oppressed peoples complement each other.”

We must return to this path of global solidarity against imperialism in all its forms.

This coming Saturday, the No Cold War campaign is holding a Zoom webinar around these themes, entitled ‘Uniting Against Racism and the New Cold War’. Speakers include Diane Abbott, Lowkey, Rania Khalek, Jingjing Li, Qiao Collective, Nick Estes, Chris Matlhako and Glen Ford. You can register for free at www.nocoldwar.org