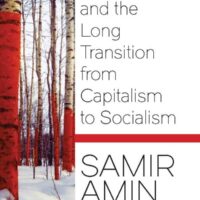 This is a slightly expanded version of an article that appeared in the Morning Star on 4 January 2017.

In this short book, the renowned Egyptian Marxist Samir Amin presents an overview of the world’s first large-scale experiment building socialism – the Soviet Union – and contextualises it within what he describes as the “long transition”: the extended, overlapping processes of capitalism’s death and socialism’s birth. The idea of the long transition is essentially a response to the end-of-history narrative prevailing in mainstream politics, ie that socialism has failed and that capitalist liberal democracy is permanently established as the pinnacle of social and economic organisation. Amin writes:

“In the same way that capitalism first developed within feudalism before breaking out of it, the long transition of world capitalism to world socialism is defined by the internal conflict of all the societies in the system between the trends and forces of the reproduction of capitalist relations and the (anti-systemic) trends and forces, whose logic has other aspirations – those, precisely, that can be defined as socialism.”

In this framework, the retreats suffered by the socialist world – particularly the collapse of the European socialist states between 1989 and 1991 – should not be considered as the death of the socialist project, but rather as part of the inevitable ebb and flow of a complex historical trajectory that could take hundreds of years but which nonetheless has an inexorable tide.

If we accept the idea of an ongoing global struggle between capitalism and socialism, then we must also consider the need to create conditions in which socialist ideas can take root; and furthermore to create a geopolitical space in which socialism could conceivably succeed. Therefore the idea of “building up a multipolar world that makes possible the maximum development of anti-systemic forces” assumes critical importance in the struggle for socialism. A unipolar world in which US is the uncontested economic, military and cultural leader (ie in which the Project for a New American Century has succeeded) is a disastrous situation for the masses of every region. The great promise of multipolarity, on the other hand, is that it frees countries and regional blocs to experiment with economic and political forms that suit them, rather than having to submit to the diktat of what Amin refers to as the Triad – US, European and Japanese imperialism.

One example of multipolarity in action is the emergence over the last 16 years of a wave of progressive states in Latin America; although our side has suffered defeats recently in Brazil and Argentina, there are still more-or-less socialist-oriented governments in Venezuela, Bolivia, Ecuador, Nicaragua, Uruguay, El Salvador and Chile. Without the existence of powerful allies (most importantly China, but also Russia and Iran) this situation would have been frankly unthinkable; it would have been impossible to break the grip of US neoliberal domination. Another pertinent example is the imminent defeat by Syria of the imperialist-coordinated regime change operation being pursued against it – a victory which would at least have been much more difficult without the support of a Russia that has, in the Putin era, shaken off its assigned role at the fringes of US global hegemony.

Hence Amin’s important thesis that multipolarity is a key component of the ongoing global struggle for socialism.

Amin also reiterates his longstanding critique of the Soviet Union and puts forward a vision for an alternative socialism that is less autocratic, more democratic, less bureaucratic and more egalitarian. This critique (which Amin has put forward for the best part of half a century, and which owes a little too much to the Chinese Communist Party’s Cultural Revolution-era evaluation of the Soviet Union) should, in my opinion, be taken with a pinch of salt. It is comprehensively and effectively answered by studies such as Al Szymanski’s “Is The Red Flag Flying?” (Zed Books, 1979).

Nonetheless, the book’s flaws shouldn’t detract from its overall valuable contribution, and indeed its urgency in a situation where the capitalist ruling classes are increasingly turning to far-right political forces in the face of a profound economic crisis.

“In an age such as ours – when there are enough weapons to destroy the whole Earth, when the media can tame the crowds with frightening efficiency, when short-term egoism or anti-humanist individualism is a fundamental value threatening Earth’s ecological survival – barbarism may be fatal. More than ever, the choice we face is not capitalism or socialism, but socialism or barbarism.”

3 thoughts on “Book review: Samir Amin – Russia and the Long Transition from Capitalism to Socialism”