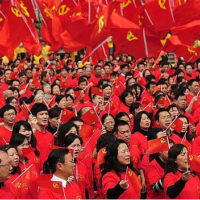 One thought on “From the Chinese Marxist viewpoint: an interview with Professor Deng Chundong”